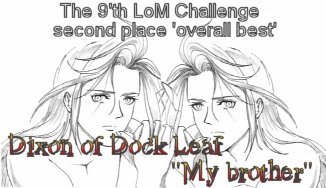 Written for the 9th Library of Moria Challenge: 'Sibling Rivalry'. Some things that are lost can never be reclaimed.

1. Chapter 1 by Dixon of Dockleaf

Chapter 1 by Dixon of Dockleaf
"Oh, my brother. For your sake, I would cast a net to the sky and bring down the stars themselves..."

"Only the stars, Boromir? For you, I would capture the very heart of the moon in a crystal shard, for what are the stars without the moon?"

"Such a challenge in your words. Ever my rival, Little One?"

"Ever your rival, my love."

The same moon I would have held captive for you now shines down into my chamber. It is a fey illumination, casting a knife-edge shadow across my lover as he sleeps.

He talks of you often; the melancholy taint of an old grief staining his fine eyes. Those eyes are the windows to his soul and he cannot hide his love from me. I see deeper than perhaps he knows.

What did you see, my brother? Did your gaze alight on the man or the king; upon the flaw or the strength?

The long night is passing. My body trembles as though I have been beaten as this lover reaches to soothe me. He barely awakens as he nestles closer and the tides of sleep wash over him once more as he sinks, warming my heart with every breath.

Is this what you knew? Is his touch on my skin merely an echo of some bolder caress, are the words of love that flow from his tongue as honey from a jar the same that must once have roused your blood? How well I remember the fire of your passion, for in the night's cool silence, it burns me still.

My lost one, we spent so much of our time in rivalry. A piquant spice to the flavour of our lives, a necessary note that went unheard until it ceased. The music of my mind became a discord and one that no minstrel's art can mend. Did you need that note as much as I?

If you had lived, what would have passed between us? Would we have become rivals for life's sweetest prize, that which sleeps here in my arms?

On whatever paths you walk, under whatever strange skies you now lift your dear face, know this and take comfort:

I would pay any price; fight any foe to be your rival once again.
Back to index
Disclaimer: All publicly recognizable characters and settings are the property of their respective owners. The original characters and plot are the property of the author. No money is being made from this work. No copyright infringement is intended.
This story archived at http://www.libraryofmoria.com/a/viewstory.php?sid=1291