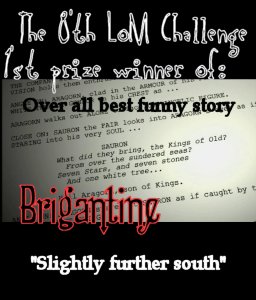 Chapter 1 by Brigantine
"Now that," Eomer confided to Firefoot, "is something you don't see every day."

Eomer hushed his curious stallion and peered around the outcropping of stone that hid the two of them.

The elf dodged around a bush. The pony followed doggedly.

Eomer might have wondered if this were a sort of game the two might be playing, except that the harassed expression on the elf's face made it quite clear to the Third Marshall that one of the participants was not enjoying himself.

The Elf feinted left, dodged right and pelted toward Eomer's position, the pony trotting close behind. As the elf passed him for the fourth time Eomer reached out to snag one slender arm in a powerful grip. The elf shrieked like a startled rabbit as Eomer pulled him roughly in. "What," the Rider demanded, "are you doing so far from the witch's wood?"

The elf panted, wild-eyed, "Witch? What?"

"This is Rohan," Eomer informed him menacingly. "I am Eomer Eadig, Third Marshall of the Mark, sister-son to Theoden King, and this is my ground you travel, Elf!"

The elf regarded him with luminous brown eyes. Up close he seemed hardly more than a tall youth, but Eomer knew better.

Eomer blinked. From the corner of his eye he noticed that the pony had come to a stop and stood watching them interestedly. Indeed, the animal seemed to be... lurking. Eomer blinked again. Did ponies lurk?

"Melpomaen? What's a Melpomaen?" This near, a softly spicy scent seemed to rise from the Elf's skin. Eomer refused to be distracted.

"Me. My name at home in Imladris," the elf explained. "Or you can call me Figwit, it's a nickname--never mind, don't ask, just please, make him go away! You're a Rider, surely you can help me?" The distraught elf clutched at Eomer's sleeve and pointed a slender finger at the pony, who stood quietly nearby... watching.

Eomer laughed, "You're afraid of a pony? Why, it's hardly bigger than a colt!"

"Oh, you don't understand," Figwit wailed. "Ordinarily I like horses, and they like me--but not in that way!" He slid behind Eomer and gripped his shoulder. "Just look at him! He's been chasing me all morning. I think..." Figwit swallowed and plucked fretfully at Eomer's shirt. "I believe he wants me!"

Eomer stared incredulously at the silently waiting pony. "Wants you? It's a pony, for the love of Eru, what would..." Eomer frowned. That pony. Right. It was definitely a male, and Eomer now realized that the animal shifting from one hoof to the other before him appeared to be, yes, in an aroused state... for some reason. All at once Eomer was entirely unsure whether to be amused or horrified. He burst out laughing.

"I hardly think," Figwit asserted primly from behind him, "that this is cause for merriment!"

Eomer hooted with delight, "A humble pony has fallen in love with a proud Elf!"

"If he really loved me," the elf in question countered, "he would have accepted that I meant No when I said it!"

Eomer leaned against the rock, tears of laughter running down his ruddy cheeks.

"Please," Figwit implored. "Can't you make him leave me alone?"

"But he loves you," Eomer spluttered.

Figwit stomped one elegant foot, protesting adamantly, "But I do not love him!"

"Oh, that is terribly sad! He'll be broken-hearted." Eomer sniffed and wiped at his eyes. "You shouldn't play with an innocent pony's affections that way. It's too cruel!"

Figwit made a vulgar noise and clenched his fists in frustration. He took two angry steps toward the forest.

Figwit squawked in alarm and dodged back to Eomer, attempting to burrow between him and the stone.

"Here, stay safely behind me," Eomer giggled. "I'll fend him off for you." He drew his sword dramatically.

The pony eyed him with an expression of woeful disappointment.

At this point Firefoot, who had observed the proceedings thus far with a sort of bemused detachment, snorted for attention.

The Third Marshall shrugged and sheathed his sword. "By all means, if it amuses you."

Eomer grinned as the big war horse chased after the startled pony. The two quickly disappeared around the stone outcropping, and well out of sight. "Your lonesome pony wanted some loving, and my boy's just decided to give it to him."

Figwit yawped. "Oh, Elbereth, this isn't happening! I am being rescued from a lustful and apparently deeply disturbed pony by a sweaty, unsympathetic Man and a talking, over-sexed horse!" He began to pace, flailing emotionally. "Could this journey possibly get any worse? Oh I know, let's add some wandering yrch--"

Eomer raised an eyebrow toward the agitated elf. "Getting choosy now? Not good enough for you, are we? I could call him back, leave you and your ardent admirer to it."

Figwit wrung his hands despairingly. "Please, it's just that I'm so far from home, and it's been a terrible, confusing day. Several days."

"And the thought of owing anything to a mere Man just puts a bramble straight under you saddle, doesn't it," the Rider deduced evenly.

Figwit sighed and had the grace to appear genuinely apologetic. "It is unfair of me, and unappreciative, I know, I just... oh dear."

"What are you doing this far from Rivendell, Elf? Business with the witch? You're more than a bit far south, even at that."

The elf frowned uncomfortably, but drew himself up with some dignity. "That, I must insist, is between Lord Elrond and Lady Galadriel. And I do wish you would stop referring to her as a witch!"

Eomer shrugged. "The last as it pleases you, but I still want to know--"

From some little distance to the west there was a sudden great ruckus of whinnying and snorting, and Figwit yelped and leaped into Eomer's startled embrace. "What in the name of Iluvatar was that?"

Eomer chuckled, puffing at long strands of the elf's dark hair flung across his face. "That's your would-be lover getting what he came for, but not from whom, nor from which direction he'd thought to have it." Figwit really did smell wonderfully good.

"You mean your horse just... oh. Oh dear. Yes, of course. Well. Oh, odds and bollocks, I never wanted to leave home anyway," Figwit began to rant. "I pleaded with Lord Elrond to send someone else; someone older, someone taller! Someone like Glorfindel! But noooo, Valar forfend that the Balrog Slayer should move his heroic arse out of Erestor's bed!"

Apparently of their own accord, Eomer's hands had begun to wander up and down the elf's back as Figwit babbled into the warm spot behind Eomer's left ear. "Three days ago a great, fierce bear chased away my horse--a very nice horse! Ran off with most of my baggage, not that I blame him, the horse I mean, not the bear, and now this!"

Eomer tried not to laugh. Figwit was warm and slender and Eomer quite liked the way he fit within his arms, and the poor fellow really had had a trying time of it. Particular parts of Eomer's brain were beginning to entertain certain sorts of ideas he had never entertained before regarding Elves.

Innocent of the Third Marshall's considerations, Figwit paused briefly for breath. "I don't even know where that wretched pony came from! I was minding my own business, washing my face this morning at a nice little stream in the forest, and the next thing I knew a strange and peculiarly insistent pony was attempting to stick his nose down my... oo. Yes. Right there, exactly. Um, excuse me... oh my..." Figwit gulped and flustered, "Not half bad, when you do it."

Eomer grinned almost gently and reached further down beneath the back of Figwit's leggings. The elf squirmed a bit, and Eomer felt long eyelashes butterfly against the side of his neck.

"Mmm... much better than the pony," Figwit admitted breathily.

"Not so horrible, for a filthy Man, then?"

Figwit sighed against Eomer's neck and arched back into the Rider's callused touch. "I will admit it's been an awfully long time..."

"...since you've been with a Man?" Eomer could not entirely resist the tease.

"Nnnn...." said Figwit, writhing discreetly. "It's just been a bloody long time overall. Um... if we continue this to its logical and likely to become extremely loud conclusion, will you respect me afterward?"

Eomer chuckled, not unkindly, his hands insinuating into tender Elven places and making Figwit moan a little and bite his lip. "A good roll in the grass is nothing to be ashamed of, if we both enjoy it. As to the noise, well," he murmured into Figwit's satiny hair, "I shall be deeply disappointed with myself if there isn't plenty."

Eomer nimbly unlaced the front of Figwit's leggings for him and briskly pushed them down to the tops of his boots, licking the Elf strategically on his way back up. Figwit made an inarticulate noise and his knees buckled a bit.

Figwit swayed on his feet, managing to stutter, "A ch-child? Give or take, I've about--"

"I don't want to know," Eomer muttered against Figwit's naked skin. He stood and kissed the partially peeled elf lightly on the mouth before swooping him into his arms and carrying him toward a little swale of high, lush grass nestled amidst the vast, rolling green pasture of the Riddermark.

As Eomer lay the Elf gently down and the long grass closed protectively over the two of them Figwit requested eagerly, "Eomer..."

"D'you suppose you could move your hand slightly further, ehm--"

"You're very welcome, friend Elf. Very welcome indeed..."
Disclaimer: All publicly recognizable characters and settings are the property of their respective owners. The original characters and plot are the property of the author. No money is being made from this work. No copyright infringement is intended.
This story archived at http://www.libraryofmoria.com/a/viewstory.php?sid=1296